Sucking Up to the Bankers : A Bipartisan Lovefest 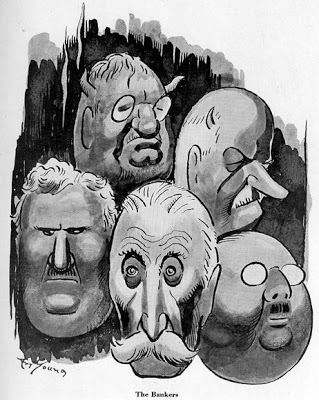 This is a time to condemn the bankers, not to embrace them. They are the scoundrels who got us into the biggest economic mess since the Great Depression, lining their own pockets while destroying the life savings of those who trusted them. Yet both of our leading presidential candidates are scrambling to enlist not only the big-dollar contributions but, more frighteningly, the “expertise” of the very folks who advocated the financial industry deregulations at the heart of this meltdown.

Republican candidate John McCain even appointed as his campaign co-chairman Phil Gramm, who went from being chairman of the Senate Banking Committee, where he sponsored disastrous legislation that empowered the banking bandits, to becoming one of them at UBS Warburg. Gramm was forced to resign from McCain’s campaign only after he went public with his contempt for the financial concerns of ordinary Americans, calling them “whiners” and perpetrators of a “mental recession.”

But Gramm and the Republicans couldn’t have done it without the support of leading Democrats. The most egregious of Gramm’s legislative favors to the financiers took the form of legislation named in part after him–the Gramm-Leach-Bliley Act, which became law only after then-Treasury Secretary Robert Rubin prevailed upon President Clinton to sign the bill. The bill’s immediate major effect was to legitimize the long-sought merger between Citibank and insurance giant Travelers. Rubin’s critical support for the bill was rewarded with an appointment, within days of its passage, to a top job at Citibank (later Citigroup) paying more than $15 million a year.

That is the same Rubin with whom Democratic candidate Barack Obama met, along with other influential advisers, on Tuesday to figure out what to do about the sorry state of our economy. But what in the world did he expect to learn from Rubin? And why did he appoint Rubin’s protégé, Jason Furman, who ran the Rubin-funded Hamilton Project, to be the Obama campaign’s economic director? Hopefully, during their encounter Tuesday, Rubin offered himself as a contrite model of everything that the candidate of change needs to change.

After all, Goldman Sachs, where Rubin spent 25 years of his business career before entering the Clinton administration, has been one of the prime corporate villains in the financial shenanigans that led to the subprime mortgage scandal. As co-chairman of the firm, surely he had knowledge of the financial hanky-panky that would prove so disastrous down the road. Indeed, as Treasury secretary, he favored an extension of the deregulation that enabled this explosion of banking avarice. Not surprisingly, the current Treasury secretary, Henry Paulson, also previously headed Goldman.

When Rubin assumed a top position at Citibank after his stint at the Treasury, he was not above influencing his former employees in the government. In one notorious instance during the fall of 2001, when Enron was going down the tubes Rubin telephoned a Treasury undersecretary and asked him to consider intervening with credit-rating agencies to hold off downgrading Enron’s ratings. When the story was leaked, some media accounts noted the possibility of a conflict of interest because Enron owed Citibank $750 million, which it could not pay if bankrupt.

Despite his skills and his vaunted position as Citibank’s chairman, Rubin was not spared the disastrous consequences of Citibank’s own wild financial manipulations, which, if anything, exceeded those of Enron. Tens of billions in bad mortgage and credit card debt placed the bank at the forefront of the current economic crisis, and so it is weird that Obama would now turn to Rubin for advice.

It’s even weirder that the presumptive Democratic nominee would pick Rubin’s man Furman as his campaign economic director at a time when cleaning up the mess left by the bankers is the highest priority. Furman hardly distinguished himself four years ago in that role in John Kerry’s failed presidential campaign, with its muffled economic message that could not be blamed on the candidate’s stiff style alone.

The bigger problem is that folks such as Rubin and Furman, perhaps best known as an economist for his bold but woefully misguided defense of the Wal-Mart business model, clearly do not feel the pain of the voters who are losing their homes.

But then again, why should Rubin, or Gramm on the Republican side, be expected to care when he has made so many millions off the suffering of those voters? Not good at a time when we need a presidential candidate who sticks it to the bankers instead of sucking up to them.

[Robert Scheer is author of a new book, “The Pornography of Power: How Defense Hawks Hijacked 9/11 and Weakened America.”]

2 Responses to Sucking Up to the Bankers : A Bipartisan Lovefest