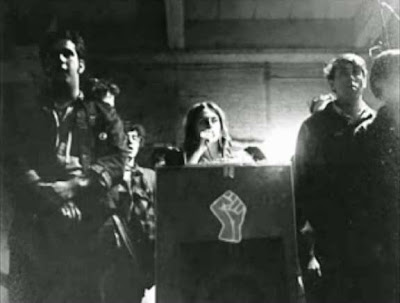 Bernardine Dohrn, of the Radical Youth Movement faction of SDS — and later of Weatherman — addresses the SDS convention in Chicago in 1969, at which the Progressive Labor Party was “expelled.” Mark Rudd, author of Underground, is to Dohrn’s right.

Within weeks of the collapse of SDS, Rudd, like most of the leadership of RYM, wound up in the bomb-making Weathermen claque. He regrets it: ‘Much of what the Weathermen did,’ he writes, ‘had the opposite effect of what we intended.’

[The Rag Blog has run several articles inspired by Mark Rudd’s new memoir, Underground: My Life with SDS and the Weathermen. Dick J. Reavis adds an interesting element to the discussion: he addresses Rudd’s account of the 1969 split within the Students for a Democratic Society (SDS) that led to the formation of Weatherman – and the eventual demise of SDS — from the perspective of a participant. Links to additional Rag Blog treatment of Rudd’s book follow this article.}

Mark Rudd was the best-known leader of the brief 1968 takeover of Columbia University by its students. He was nationally notorious for a fleeting span of time, and for several years, was on the lam, wanted by the FBI. He has belatedly written a memoir, Underground, which I think deserves a read by all of us who were seriously involved in the Students for a Democratic Society during the group’s waning days.

Rudd’s chief historical contribution, in my view, is a chapter entitled “SDS Split,” his account of the group’s death throes. I have not read all books about the rise and fall of SDS, but I’ve read a few, and Rudd’s work is the first that fully explains what happened there — in accord with my memory as one who was present, anyway.

Rudd admits that from the podium where he stood, he and his cronies estimated that the Progressive Labor Party faction had a majority or near-majority of delegates. The incumbents with whom he ran, most members of the faction that then called itself the Revolutionary Youth Movement, responded by “expelling” the PLers in a fashion which troubles him yet.

“The long-feared split had occurred without any full debate by the whole organization, without any vote taken,” he writes. “It was a fait accompli, a coup of sorts, presented by the RYM faction.”

In other words, those who claimed — some of whom still claim — to have represented the “real” SDS, refused to accede to a changing of the leadership by democratic, if “manipulative” means. They were the tyrants, if any there were, unless “manipulation” is verboten.

As a former member of the PL faction, I could not be honest without admitting that PL manipulated — played by the rules, but played to win — in SDS. But politics, on its face, is nothing but the manipulation of other peoples’ behavior. To whimper about it as Rudd occasionally does in deconstructing SDS factional conflicts is to ask for an organization whose soul would have been naiveté.

Rudd is not a poetic writer, but his memoir is highly readable in part because of its humility. It’s a work of self-doubt and self-criticism. He does not repudiate his opposition to the Vietnam War or savage capitalism, but he does confess, time and again, that he and its other leaders were out of their league. Reading the book made me feel sorry for Mark because he blames himself too much.

Within weeks of the collapse of SDS, Rudd, like most of the leadership of RYM, wound up in the bomb-making Weathermen claque. He regrets it: “Much of what the Weathermen did,” he writes, “had the opposite effect of what we intended. We deorganized SDS while we claimed we were making it stronger; we isolated ourselves from our friends and allies as we helped split the larger antiwar movement around the issue of violence. In general, we played into the hands of the FBI — our sworn enemies. We might as well have been on their payroll.”

PL’s student leaders of the era, who perhaps should speak on the question, haven’t been heard from in 30 years, as far as I know. Nobody I know, including a dozen ex-PLers, has any idea about what has become of them. I was never a full-fledged PLer, and so am perhaps an unauthorized voice. But I was as much a PLer as anybody in Texas, and if I can still presume to speak for what was our faction, I’d say that Rudd and his comrades have long been forgiven, at least by us, their vanquished former rivals.

The split in SDS, I’ve always thought, was nearly inevitable. Smarter leadership could perhaps have prevented it, but only by abdication, and only in a limited way.

The problem was that what might be called the Port Huron generation had by 1969 spent several years protesting the Vietnam War without any significant effect on the nation’s policies or actions. Most of us had graduated or were graduating from college. We were facing 40 years of life as adults and we dreaded the prospect because we didn’t know what we would do, or where we would fit. To guide us, as we’d gone along organizing protests, we’d formed world views that were bigger than the anti-war cause.

Those of us who had become Marxists — in SDS, mainly followers of PL and of the Spartacist League — had adopted a plan that stunted our ambitions and shrunk our sense of self-importance. We’d been convinced that we had to join the industrial working class, from whose ranks we’d agitate for unions and revolution perhaps until we retired or died. PL sloganized our nearly humdrum agenda as “Build a Base in the Working Class.”

Rudd and the Weathermen claimed to be Marxists, but in effect, they substituted American youth, including themselves, for industrial workers, as the agents of socialism. Their attitude, and I’m afraid, even their political wisdom was summed-up in chants like “Oink, oink, bang, bang! Dead pig!” They wanted Revolution Now! — or if not that, Vengeance Now!—and they thought that they could spark it.

The plain facts, seen in retrospect, are that the industrial working class was already doomed to decimation, and that the much-vaunted youth rising was more nearly a generational tiff than a political one. Most of us whom PL sent into factories gave up as soon we saw that the workers wouldn’t listen. Most Weathermen dropped out after learning, as Rudd did, that life on the lam was brutish, lonely and impotent. It hurts to say so, but Bill Clinton and George Bush, and maybe even Nixon and Reagan, gauged the political capacity of our generation far better than we did.

SDS could have survived, I believe, only if it had preserved its innocence, only as a group that held out hope for capitalism and its parties and sought merely to be heard by the people in power. But to have done so, those SDSers who had learned the lessons of the protest movement — that appeals to rulers are routinely ignored or deflected — would have had to distance themselves from their base. We would have had to stand aside while greener students repeated the mistakes that we had made.

Even our abnegation would not have produced an anti-war movement of the scale we had known, because the millions of young whites who attended anti-war protests — the recruiting pool for both the PL and Weathermen factions—returned to purely personal and domestic concerns almost as soon as the draft lottery was instituted.

If anybody is responsible for the death of SDS, it is the officials who, with our concurrence, abolished conscription. They placed the question of war and peace on a new stage, on which we haven’t gotten our footing yet. The hour is late and we are nearing our graves: it’s highly unlikely that we will lead any movements now. If we are as honest as Rudd, we will admit that back in the day, we failed. Neither he nor the rest of us are to blame. It is perhaps heresy to say so in the United States, where optimism is a tenet of a Foucaultian, nearly mandatory faith, but for all of a polity’s problems, solutions are not always at hand.

[Rag Blog contributor Dick J. Reavis is an award-winning journalist, educator and author. He was active in the civil rights movement in the South and with SDS at the University of Texas in Austin. He wrote for Austin’s underground newspaper The Rag, and was a senior editor at Texas Monthly magazine. Dick Reavis’ book, The Ashes of Waco: An Investigation, about the siege and burning of the Branch Davidian compound, was published by Simon and Schuster and may be the definitive work on the subject.]

Find Mark Rudd’s Underground: My Life with SDS and the Weathermen on Amazon.com.

8 Responses to Dick J. Reavis on Mark Rudd’s ‘Underground,’ and the 1969 SDS Split